FREE UK MAINLAND DELIVERY ON ALL ORDERS OVER £100 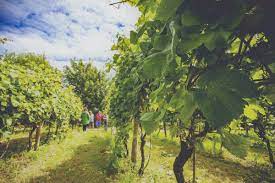 After many years trading as fish merchants in Newlyn,  John and Kim Coulson decided they needed a new adventure. After buying a run-down flower farm in Penzance and following some advice from Bob Lindo at Camel Valley, they decided to plant vines and create their own Cornish vineyard.

From the very first wine harvest in 2006, Kim and John created the first Polgoon rosé and were subsequently awarded the Waitrose Trophy for Best Still Rosé in the UK. The next two harvests also won major national competitions but unfortunately, after these early successes, Polgoon suffered from bad harvests in 2007 and 2008 after enduring terrible Cornish weather conditions, leaving almost no wine…

Determined not to be beaten, the Coulsons perfected a Cornish cider called Aval (Cornish for ‘apple’), a sparkling cider product made using the Methode Traditionelle, the same method used by French winemakers to produce their sparkling wines.

Polgoon then added a further product to the range, Raspberry Aval, which  has gone on to become its bestselling sparkling drink.

The summer of 2009 was a good one for growing  fruit, Polgoon had a strong harvest and set about developing a range of Cornish ciders and juices to further extend the range.

Today we have a wide range of award-winning sparkling and still wines, ciders and juices sold across the country and in our Taste Of The West, Gold medal-winning shop, full of local Cornish products.